We’ve been talking a lot about RES-ing, GPRs, drones and all the technology we’re using here on site in Italy, but what do all these machines actually do, and how do they help us as archaeologists? If you’ve been wondering about these very issues then read on! The first piece of kit I’ll be talking about is the resistivity meter or, RES.

In the most basic terms, the RES measures the flow of electricity through the ground and any structures that might be hidden there. Archaeological features can be identified when the resistance that the electricity faces is much higher or lower in certain spots than in the rest of the surrounding area. This could either be high resistance from something like a rock or stone, or extremely low resistance from an organic material or even displacement of stones that may once have formed an ancient structure. 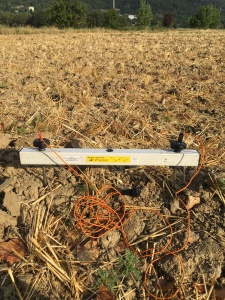 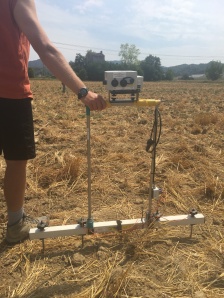 The mobile probes and brain

But how is data actually collected and organised by the machine? The backbone to any survey is the grids – 20x20m or 10x10m squares, set up with coloured poles and cones to mark the corners. For the RES we also place small markers at 2 metre intervals on two opposing sides of the square. We try and fit as many grids as possible within a field in order to maximise the area we can survey.

Once the grids are up we can begin RES-ing. points need to be taken every metre, and by using metre marked ropes between the 2 metres markers on the perimeter we can quickly walk up and down the grids by moving the ropes to the premeasured markers.

All members of the RES team for the day have assigned jobs that rotate every time we move to a new grid. The main task is to walk the machine up and down the ropes within the grids, inserting the probes at every metre mark. Each pair of probes measures 50cm in each direction, giving an overall reading of 2m x 1m. Equally important is the cable holder who ensures the electric cord is not being pulled too tightly and also that it is clear of the mobile probes. Probes piercing electrical cable = bad news.

The last two places are filled by rope wranglers who manoeuvre the ropes across the grids whilst also ensuring the cable isn’t tangled and the walker is evenly aligned between the ropes.

We have found that these are the minimum numbers for an effective team, but should more people be with us for a session, jobs can always be found for them as additional rope or cable wranglers. 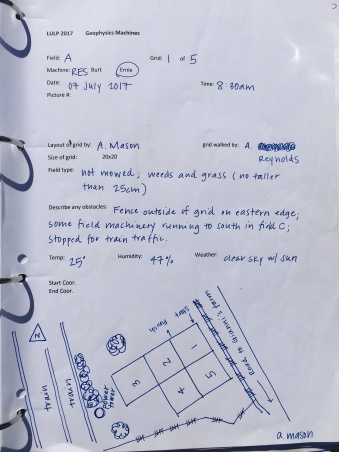 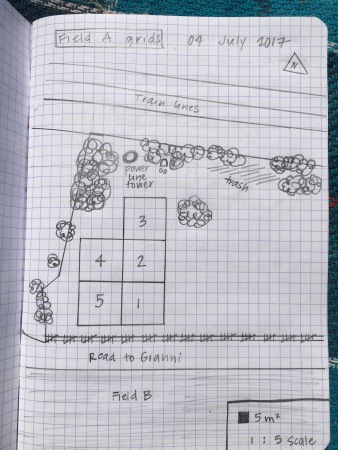 Note taking is also a hugely important part of any survey. We like to keep records of as much as we can so that in the event of any problems or discrepancies with data we can look back and work out what might have gone wrong and where.

You can see from the picture above that we note time, date, location, namer of the walker, name of the supervisor, temperature, humidity, as well as a technical sketch of the field and grids.

Once the data has been collected it is “dumped” onto a computer and processed. Whilst is can often take a trained eye to spot things, there are occasions when features jump out of the screen and are immediately visible. Take this shot for example…

That gigantic black line running through 2 squares…yes, that’s a structure! knowing the size of each grid (20x20m) we can also judge the approximate size of the structure which helps determine whether something might be, for example, a wall or a road.

In this field you can also see that one of the squares has not produced any data. In this case it was because there would have been a fence running through the corner if we had placed a grid there. this is also visible on our paperwork.

With this data, we are now able to make a much more educated decision on whether or not the area is worth excavating in the future, and we can also add structures to maps of the area.

One thought on “Survey 101 – An Introduction to Resistivity”

This site uses Akismet to reduce spam. Learn how your comment data is processed.