As we are deep in the winter season and the natural forces of rain, wind, and snow become more and more vicious we thought this would be a good time to tell you about some incredible people we know in our Italian “hometown” – Arquata Scrivia.

Italy has its fair share of natural disasters – flooding, storms, and earthquakes to name but a few, but how do they plan a rescue response? The police force, medics, and fire department preform heroic services but additionally, there are Gruppo Rangers Volontari, or volunteer groups, all across Italy.  In Arquata Scrivia the local Rangers have a rescue and training base. In the summer for the month we are in town they allow us to use it as our accommodation, which we usually refer to as “the lodge”. We transform their workspace into our bedrooms, kitchen, and office. However, even with us there the Rangers are prepared to deploy at a moment’s notice!

In between our cots and supplies are safety helmets, resuscitation dolls (good for the middle of the night practical jokes), safety posters, and of course the many many awards that the Rangers have collected all over the walls.  After two years, we thought it was about time we learned a lot more about the Rangers and their important work. It’s only fair to share that information with all of you!

We spoke with the current Chief Ranger, Gian Paolo Gifra who was proud to tell us of this history of Arquata’s Rangers. He told us that throughout Italy, there are many independent groups; ordinary citizens, bakers, shopkeepers, teachers, dentists, etc. who train in rescue and first aid in order to assist when disaster strikes. The Arquata Scrivia Rangers were founded in 1985 and originally comprised of an association of men working on horseback. They maintained and preserved the forests surrounding the town. A lot more work goes into sustaining a forest than you might think! Paths need to be cleared, damaged and sick trees need to be removed and wild animal populations need to be kept in check! Careful forest management means the woods are safe for people to work in and enjoy while providing food and fuel to the surrounding community.

After a few years, the group began to expand its mission helping control wildfires and rescuing stranded hikers. They eventually graduated from horses to specially equipped Range Rovers! The Gruppo Rangers Volontari started training in advanced rescue skills so that they would be prepared for any future disasters.

The people of the city of Alessandria (located about 40 minutes from Arquata) were grateful for this foresight as the first major emergency the Rangers dealt with was on November 6th, 1994. The Tanaro River Basin experienced devastating flooding and the city of Alessandria was particularly hard hit leading to many deaths. The Gruppo Rangers Volontari provided assistance. They rescued trapped locals from the water and mud damaged areas and provided life-saving logistics – bringing in blankets, food, and helping with temporary housing.

After this major event, there was a governmental push to recognize all of the local associations of small volunteer rangers. Although they kept their name, they became part of the Protezione Civile – Piedmonte, Civil Protection Association of Piedmonte, which recognized them as an official volunteer group. At that point, standards were set nationwide for training ensuring that everyone was fully trained and qualified before going out into dangerous situations. This change ensured that every member both present and in the future would have the necessary skills and knowledge to be truly helpful in a disaster situation. Arquata’s Rangers were up to the challenge of meeting these standards and they have grown stronger since then. This recognition also meant that they can be called to work on national emergencies if required.

And required they have been. Arquata Scrivia and the province of Alessandria are proud that their Rangers have been awarded many medals and certificates of merit. They assisted with the flood of Grondona in 1995, the Umbria earthquake in 1997 (they were awarded a medal by the Ministry of the Interior), the flood of  Casale Monferrato and Morano sul PO in 2000, and the earthquake of April 2009 in Abruzzese. 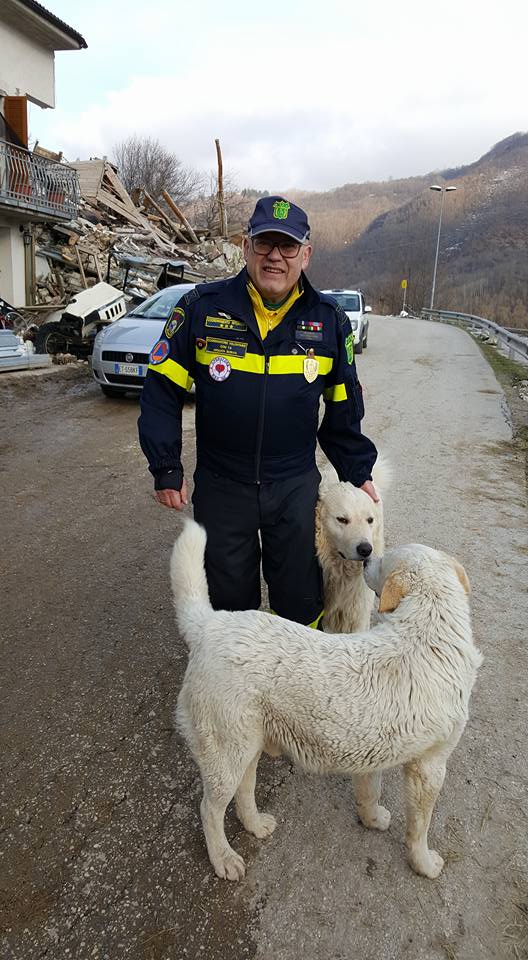 The Rangers’ Facebook page is filled with pictures like this- here Chief Gian Palo Grifa helps people (and animals) in a disaster zone.

The group runs entirely on public donations – they must pay for their insurance and equipment, although the local commune (council) has donated a building with office and workspace (which is what we take over in the summer!) in which they can hold meetings, training sessions, and store all their equipment and cars.

Like the rest of Arquata, these folks welcome us and the students each summer. They provide support to our archaeological endeavors; without them, LULP would not be able to function. So hats off to Arquata’s Rangers! Like the rest Arquata Scrivia we are glad to know if the worst should happen, we have them nearby! If you want to know more about them please visit their page on Facebook!

One thought on “Rangers”

This site uses Akismet to reduce spam. Learn how your comment data is processed.